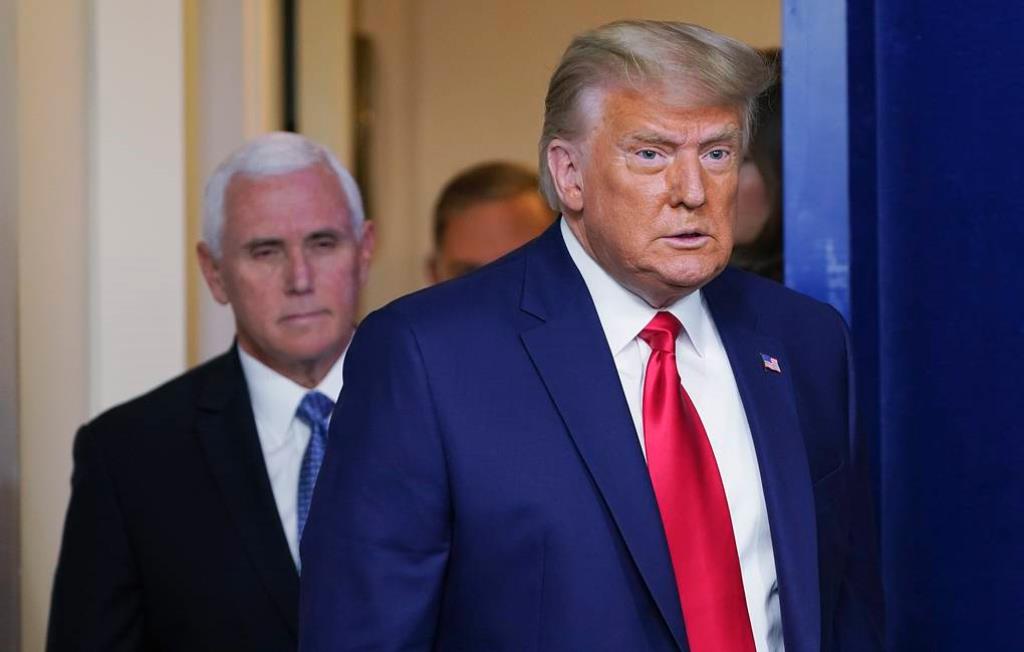 President Donald Trump walks out to speak in the Brady Briefing Room in the White House, Tuesday, Nov. 24, 2020, in Washington as Vice President Mike Pence looks on. (AP Photo/Susan Walsh)

Incumbent US President Donald Trump has recommended that General Services Administration Chief Emily Murphy start working with Joe Biden’s team to launch the formal transition process. For the US media and millions of people around the world, this is tantamount to Trump acknowledging defeat. But stepping aside from the White House, Trump and the Republican Party still have the chance to take control over both houses of the US Congress, Nezavisimaya Gazeta writes.

Senior Research Fellow at the Russian Academy of Sciences’ Institute for US and Canadian Studies Vladimir Vasilyev does not rule out that Trump seeks to escape public criticism, making Biden its target. “The media accuse Trump of putting national security in danger by clinging to power. His opposition may create a situation where in two months, Biden will have to enter the White House without a team. Now Trump has made it possible for Biden to form one who may come under fire over his administration choices,” the expert explained.

Biden has already announced his foreign policy post picks but it is still a mystery who will handle economic and domestic affairs in his administration, which is the most important question for the American people. In Vasilyev’s view, Trump expects that Biden’s nominations will create issues within the Democratic Party. It won’t suit the party’s left wing if the team of Barack Obama and Hillary Clinton returns to the White House. Meanwhile, disputes between the left and the center-right of the Democratic Party will play into the hand of the Republicans.

The Senate run-off elections in Georgia, scheduled for January, will make it clear who will control the upper house of the Congress. As for the House of Representatives, the Democrats currently have 222 seats, while Republicans have 210. Election results have been challenged in three districts and if at least four congressmen leave the Democratic faction in the House, the party will lose its majority. Consequently, in the best-case scenario for Trump, he will be able to bind Biden hand and foot. / info: tass